Talented high school students get a taste of college life

Since the opening of Stanford High School Summer College in late June, Paul Song has been crisscrossing campus on his trusty skateboard, making his way to classes, to his favorite study spot in Green Library and to the gym for workouts and Sunday basketball games. 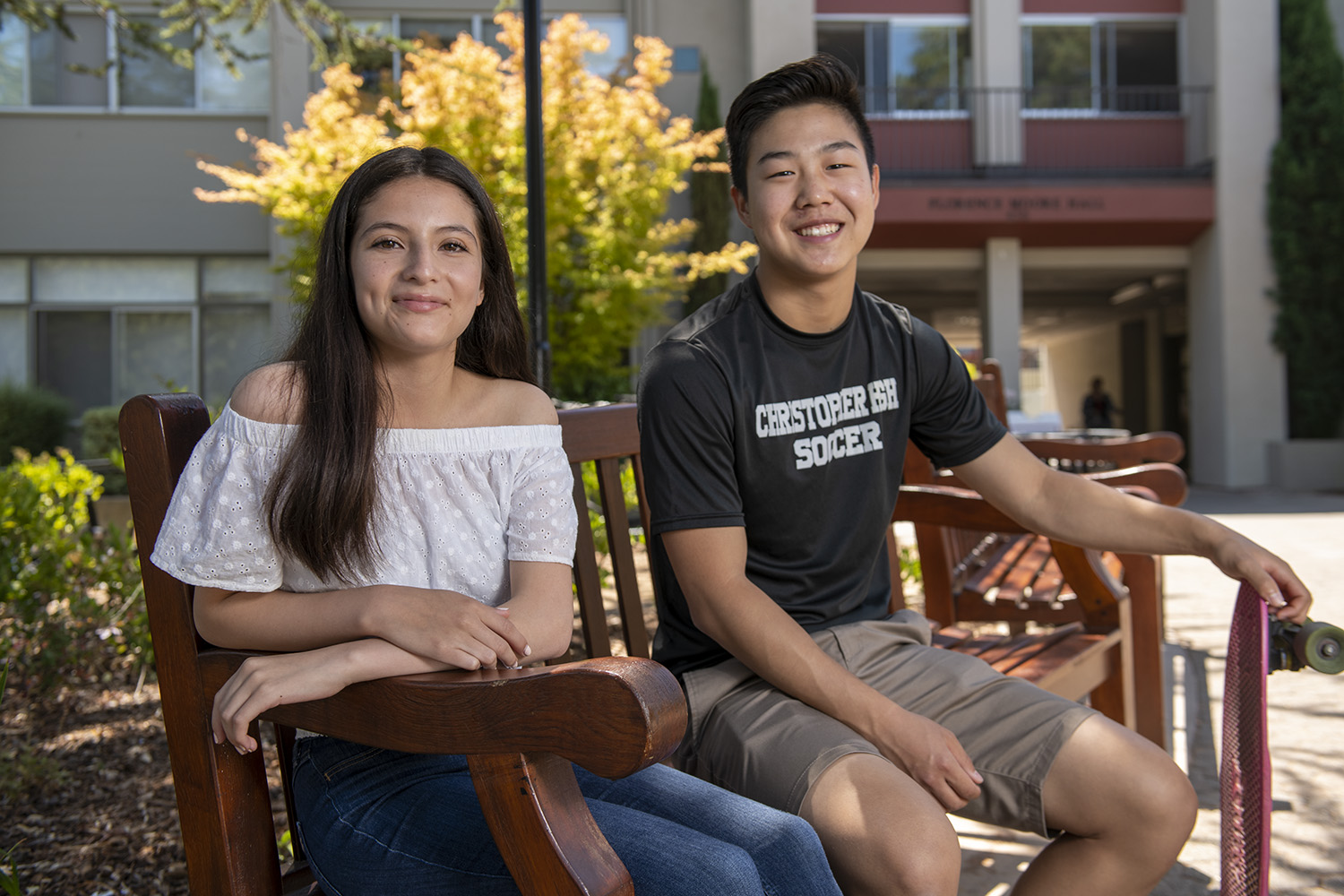 “I especially love going through the Science and Engineering Quad to get to my physics class – Stars and Planets in a Habitable Universe – because I like to relax on the grass hills before entering class,” said Song, who lives in Gilroy, California, and will begin his senior year of high school in the fall. “I like the clean lines of the modern buildings and the vibes.”

Song is one of 21 rising high school seniors in the Horizon Scholars program, which provides scholarships to high-achieving students from low-income families. About half of the students come from California. The rest come from five other states – from Colorado to Florida – and from Washington, D.C.

When the Horizon Scholars arrive on campus, they immediately become part of the community of 600 high school students from across the country and around the world enrolled in Stanford Summer Session.

Song’s day begins each morning at Florence Moore Hall, where he has struck up a friendship with his roommate – Eren Findik, a high school student from Turkey.

“We both love music, and one time we spent an evening playing random songs like the theme from The Godfather in our dorm together – Eren on his guitar and me on my cello,” Song said. “He is also really good at basketball.”

Dalila Brito, another Horizon Scholar who lives in “FloMo,” as the dorm is affectionately known, has also befriended her roommate, a high school student from China. Brito said their friendship has helped her adjust to living away from home for the first time.

“It’s really cool, because we get to share stories about our cultures,” said Brito, who lives in Salinas, California, and will begin her senior year of high school in the fall.

“I talked to her about stuff we do in Salinas in the summer – like going to the rodeo to watch professional bull riding. I told her about the food that is typical in my culture – like pozole, a traditional Mexican stew, and rice and beans. I was telling her that the foods I miss most are the simplest ones – tortillas and sweet bread.”

Brito, who loves walking around campus, heads to the historic Main Quad for her sociology class, Gender, Politics and Power, and to the Sapp Center for Science Teaching and Learning near the Oval for her wellness class, Mindfulness and Stress Management.

“I think it’s really nice how the architecture of the building is old style, but the inside is modern,” she said of the Sapp Center, which is located in Old Chemistry, a campus landmark transformed into a state-of-the-art center for undergraduate science education.

Brito’s and Song’s paths intersect at Lathrop Library, where they are enrolled in An Introduction to College Writing.

Venturing far and wide in academia

Under the Horizon Scholars program, the students can choose among 140 courses offered to the high school students by the School of Engineering and the School of Humanities and Sciences. In addition, they are invited to take a fitness, recreation or wellness class to nurture their mental health and well-being.

This summer’s cohort ventured far and wide academically speaking, with courses ranging from Global Women Leaders: Past and Present to Cell Phone Photography; from Molecular Genetics and Biotechnology to Greek Mythology; and from Sustainability Design Thinking to American History in Film Since World War II.

In addition to his physics and writing classes, Song took an academic skills course.

“In my Working Smarter class, a I learned a specific study strategy – a scientifically proven, effective way to keep your brain at maximum focus – that I have used this summer in my writing and physics classes,” he said.

The Horizon Scholars gather weekly for afternoon workshops – Horizon Fridays – designed to encourage them to think about their own stories and identities, and to help them develop skills that will help them thrive in college. The workshops include presentations on the power of storytelling and the benefits of engaging with diverse communities.

Brito and Song said it has been a privilege to take classes from Stanford teachers.

“The experience has been great and has helped me understand better how college works,” said Brito, who recently took her visiting parents on a walking tour of campus. “Thanks to my classes, I have been able to pick up new study habits and learn lots of new things. It will be an experience I will never forget because it contains so many good memories.”

“Time just flies by here,” he said. “I really wish I could stay longer than eight weeks.”