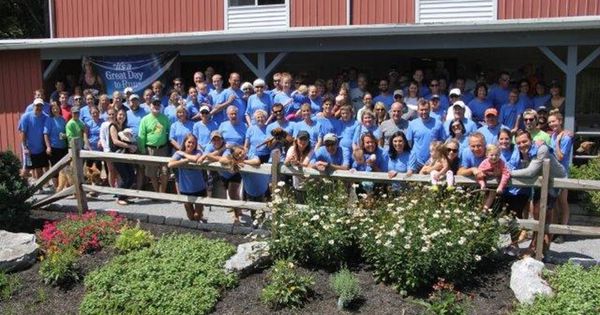 Who’s the best person you know? The nicest, the kindest, the most fun? For so many people who knew Ian Wolfe, there was an easy answer.

“He was the best,” said Meryl Wolfe, his sister-in-law by marriage. “He was really such a great guy.”

Ian Wolfe was born in 1984 and grew up in Mechanicsburg, Pennsylvania, one of four children from an easy-going and tight-knit family. He and Meryl (then Meryl Greenblatt) met at Virginia Tech and became fast friends.

“We went to music festivals together,” said Meryl. “Ian was always telling me, ‘You have to meet my brother!’”

Meryl met Austin Wolfe in 2007, when a crew of friends from Virginia Tech drove to a Sound Tribe Sector 9 show in Washington, D.C. Also in the audience was John Paul Wolfe III, the third of the Wolfe children. Meryl remembers feeling comfortable around the Wolfe family, which she described as similar to her own. In 2014, she and Austin were married.

Ian Wolfe passed away in 2008, the victim of a biking accident in Washington, D.C. In honor of his passions — college and running — the Wolfe family created the Ian Wolfe Memorial Scholarship, which provides two $2,500 scholarships per year to runners at Ian’s old high school in Mechanicsburg.

Community and family gather to celebrate the memory of Ian Wolfe.

Since 2009, the fund has raised over $47,500 for students, mostly around a 5K run that takes place every summer in Mechanicsburg. When the “It’s A Great Day To Run” event takes place again on July 27th, 2019, it’ll engage not just a family, but a community. One of the sponsors, Giorgio’s Pizza and Subs, is run by Grant Richards, one of Ian’s best friends growing up. Although Richards’ wife is due with their third baby on the same day as the run, Richards still insisted on providing food for hungry runners. There’s a local mortgage company that donates, and a local car dealership, and teachers who had Ian as a student.

One of the most interesting sponsors of this year’s event is Wolf Brewing, a brewery in Mechanicsburg that was founded by Derek and Elaine Wolf (no relation to the Wolfe Family). In July 2013, the Wolf’s set a goal of winning a brewing award in every state; to date, they have a total of 119 awards from all 50 states with 55 different beers. The Wolf’s knew Ian and his siblings from their childhood. During this year’s run, they’ll be serving two beers in honor of Ian.

Levi Wolfe and Meredith Gottschalk participate in the 2017 5K race.

“Giving back is at the heart of Wolf Brewing Co’s mission and vision,” said Derek Wolf. “Ian was such a kindhearted person and we’re happy to help support his scholarship fund in any way we can.”

In 2019, with over 7,000 breweries or breweries-in-planning across the country, making a good product is no longer a measure of distinction. However, Wolf Brewing has found another way to set themselves apart — if you had a choice between two breweries, both of which made great beer, you’d probably choose the one that also invests in their community. In addition Wolf’s unique beers (at the event, they’ll be serving IMW IPA, a session IPA brewed with Citra and Mosaic hops, as well as Mexicali Brews, a sour ale brewed with wheat, organic pink Himalayan sea salt, crushed organic coriander, organic limes, lemons, oranges, and a dash of Don Julio 1942 and Cointreau), they’re also committed to a sustainable future for Mechanicsburg.

“Mechanicsburg is our hometown, and helped shape us into the individuals that we are today,” said Derek Wolf. “Craft breweries should be great stewards in the local community, and a big part of that is giving back to local non-profit/charitable organizations.”