Introducing “What’s Up Wednesday!” a new feature on NIUHuskies.com and the Huskies’ official social media platforms! On Wednesdays throughout the upcoming year, look for the latest news and information specifically for NIU fans. From game promotions, to the latest ticket deals and deadlines, special events, radio show schedules and more, check out What’s Up Wednesday to stay in the know about the defending Mid-American Conference Champion Huskies. 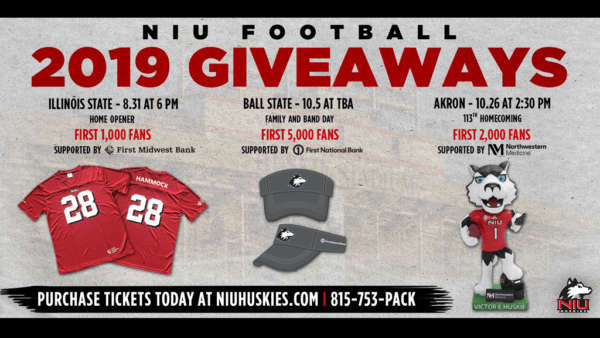 The line-up of unique giveaways available to a limited number of Huskie fans at each of the first three games add even more value to every NIU ticket purchase in 2019. Giveaways include Hammock jerseys, Huskie visors and Victor E. Football bobbleheads. The return of Ag Day, Family Weekend and Band Day, NIU’s 113th Homecoming, Military and First Responders Night and Senior Night will all be celebrated at one of the Huskies’ five home games.

On Saturday, Aug. 31, when the Huskies open the season at home versus Illinois State, the first 1,000 fans in the stands will receive a one-size-fits-all Thomas Hammock replica jersey, courtesy of game sponsor First Midwest Bank. The 6 p.m. game also marks the return of Ag Day, presented by Case IH, while the Newman Center will be giving away free corn on the cob in The Yard.

On Saturday, Oct. 5, NIU will take on Ball State in the Battle for the Bronze Stalk with the first 5,000 fans receiving a Huskie Visor courtesy of game-presenting sponsor First National Bank. The Ball State game, which is also brought to fans by Ideal Industries, marks Family Weekend on campus with a special Band Day halftime performance.

The Huskies will celebrate their 113th Homecoming with a whole week of events throughout campus, culminating in the football game on Saturday, Oct. 26. The game, and the special edition Victor E. Huskie football bobblehead, are presented by Northwestern Medicine. Bobbleheads will be presented to the first 2,000 fans in the stadium for the 2:30 p.m. kickoff. The game is brought to fans by the NIU College of Business.

NIU will honor veterans, current members of the military and first responders on Tuesday, Nov. 19, during its game versus Eastern Michigan, which will air on ESPN2 or ESPNU beginning at 6:30 p.m., while the 2019 Huskie seniors will be honored prior to the 6 p.m. kickoff of the Western Michigan game on Tuesday, Nov. 26.

In addition, NIU Athletics will continue the “Huskie 100s” promotion, which provided $100 to students simply for attending NIU Football games. NIU students, who are admitted free to every NIU Athletics home event, are automatically entered to win the Huskie $100 when they enter the gates on the East Side of Huskie Stadium at each game using their OneCard or the new Experience mobile ticket.

Winners — 10 per each 1,000 students in the stands — will be drawn at random from the student ID numbers associated with the scanned entrances at each game. The winners will be drawn with 10 minutes remaining in the first quarter — so students must be in the stands prior to that time. The winning names will be announced and displayed on the videoboard, during the last timeout of the third quarter and winners must be present and meet the NIU Athletics representative at the south end of the East bleacher concourse following the announcement to receive the $100.

This initial schedule may be supplemented by additional promotions, giveaways and sponsor elements, along with a complete line-up of in-game contests and giveaways. Giveaway item quantities are limited to one per person and will be available on both the East and West Sides of Huskie Stadium until supplies are exhausted.

Season Tickets for all five 2019 NIU home games are still available, starting at as little as $60 for an East Side (general admission) season ticket. Purchase four tickets for family or a group of friends on either the East or West Side for as little as $55 or $75 per person with the Huskie Family Pack.

Three-game Mini-Plans, which include a choice of any two Saturday and either #MACtion (weeknight) game are just $70 each for all three games, while the new Huskie Flex Pass offers the chance to purchase a minimum of five tickets to any game or combination of games for $75, or just $15 each. The new Saturdays’ Special includes a ticket to all three Saturday home games as well as a voucher good for a hot dog, chips and a soda for each game for just $110.

To renew or purchase new season tickets and #JointhePack for 2019, click the links above, which are available 24 hours a day, seven days a week. Tickets are also available by calling 815-753-PACK (7225), emailing huskiestickets@niu.edu or stopping by the NIU Athletics Ticket Office in the Convocation Center, which is open Monday through Friday from 9 a.m. to 5 p.m.