Parents, it’s okay for your kids to see you missing them. It might even be a good thing. 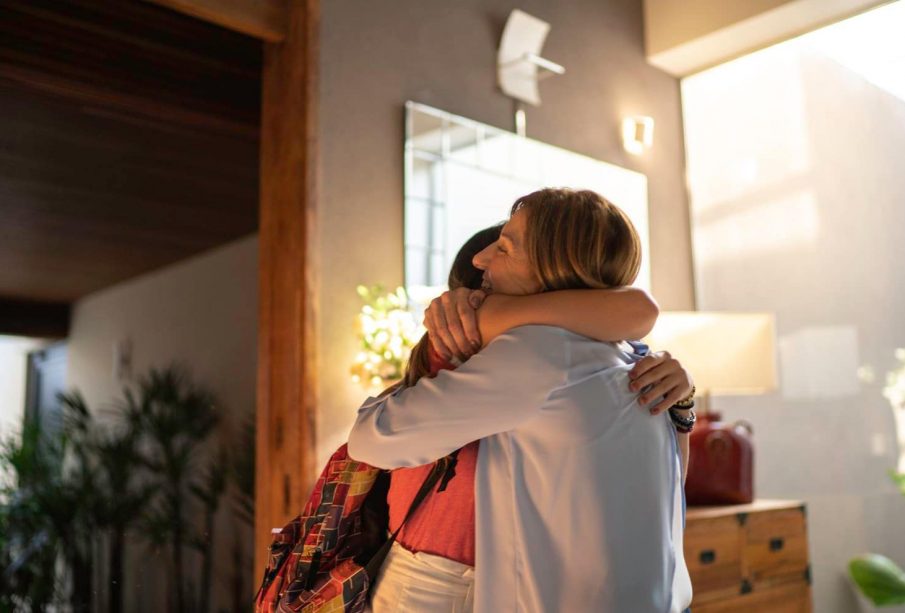 Jonita Davis is a freelance writer based in Indiana. Find her on Twitter @JonitaLDavis.

I drove with a heavy foot, forgetting laws and penalties for speeders. I didn’t even consider my husband’s warnings about the additional scrutiny on my Indiana plates in the South. I didn’t care. My heart was breaking and threatening to pound out of my chest. If I could get to the state border, I thought, I could allow myself to break. Only then would there be enough miles between us that I couldn’t go back to that college where I had just left my Cate, to snatch my baby up and bring her home with me.

At the state line, I pulled into a rest stop, got out, mumbled something about needing to stretch and walked down a nearby path to cry. Within minutes, I was openly weeping by a picnic table. I had not come on this trip alone. That was another reason for holding it in while I was driving. My oldest child, Chloe, was with me, along with my mother and my toddlers. I couldn’t let them see this ugly breakdown. Chloe must have understood, because while I was breaking down, she hustled everyone for a bathroom break.

Despite my efforts to conceal it, I know now that everyone in that van that day knew what was happening. The only person I was hiding anything from was myself. In trying to protect Cate from my sadness and how much I would miss her, though, I missed an opportunity to bond with her before she transitioned into the next stage of her life.

During the early fall of her senior year in high school, Cate, the second of my six kids, announced that she was going to attend college 1,600 miles away. I wanted to crawl into a fetal position and keen like an injured animal. Chloe had stayed close, enrolling in a local commuter college. I had expected Cate to stay close as well, but she chose to leave the state for the school of her dreams. I had carried this child for more than 42 weeks, yet I had less time than that to get used to her leaving me.

The early acceptance notice came. We just had to wait for the financial aid packages. The wait was because of me. We were flagged for verification by the Education Department and needed to send in tax records and sign a paper. It took me three months to bring myself to gather these documents. Cate and I eventually fought over what we both knew was a symptom of my suppressed grief in anticipation of her leaving.

[My kids learned from my struggles, even when I thought they weren’t watching]

I let her pack and prepare with minimal input. We talked about her new home, but I couldn’t even do that without having to cut the conversation short and distract myself from my own emotions. It was a brutal time, and the distance I created almost cost me my relationship with Cate.

The next year, Kara, my third oldest, announced that she was going to college at the other end of the state. I was triggered, and the emotions I’d been suppressing since Cate left came roaring back. I could not do it again. So I decided to do things differently. I wouldn’t bawl and scream while hugging her legs so she wouldn’t leave, but I also wouldn’t hide how much I was going to miss her.

Instead, I actively enjoyed her. I set up dates with Kara that included dinner and catching a movie. We spent wintry Sunday afternoons bingeing Lifetime movies and “Bridezilla” episodes, laughing and crying into tubs of cookies-and-cream ice cream. We baked together. I talked with her about her plans for college. On move-in day, I played the songs I used to belt out in the car when they were babies.

When I dropped her off at her new home, the emotions came back hard. So I gave Kara a big and sappy hug, unlike the stiff, formal embrace I’d left Cate with. Neither of them are huggers, but making a display of Kara’s hug helped curb the broken heart I was carrying. I did cry on the way home, to the same songs we had listened to before. And this time, I felt happy and proud to leave my kid to start a new chapter.

After the fact, I noticed that my virtual connections with the girls were also different. Because I tried to hide so much from Cate, I wouldn’t let her see me tear up during a Skype call. I would hand off the computer to the toddlers, or turn the camera to the dogs, letting Penny and Angus take it away until I collected myself.

When Kara called, though, I admitted if I was down or tired or needing to hear her voice because it had been a week or two. That made it easier to chat in the beginning and eased the transition for both of us.

There is no way around the pain and heartbreak of leaving a kid at college. That’s why move-in day is so emotional. It has to be. Just like all the other milestones — walking, potty training, kindergarten, periods — it’s all a part of growing up for them, and for us. So don’t try to avoid it, beat it or even hide it as I did. Doing that steals time and attention that could be spent bonding with your child. And it can prevent you from making a transition into a healthy relationship with your adult offspring.

Letting them see you miss them helps everyone move on to the next stage.

Thankfully, Cate and I have worked through those challenging first months and are on solid ground. I just spent a weekend helping her move into a new place. We spent a day at Target getting essentials and went out for lunch, faces deep in some barbecue. I’ll visit again in October. She is already making plans for us to play hooky on her college’s Parent Weekend. I can’t wait.

I thought if I hid my anxiety, I could shield my children. I was wrong.

The empty nest: What I learned during my daughter’s first year away

Why I don’t ask about my kids’ college grades