The National Park College Board of Trustees and other officials broke ground on the school’s first on-campus residence hall, Dogwood Hall, outside of the Gerald Fisher Campus Center on Wednesday. 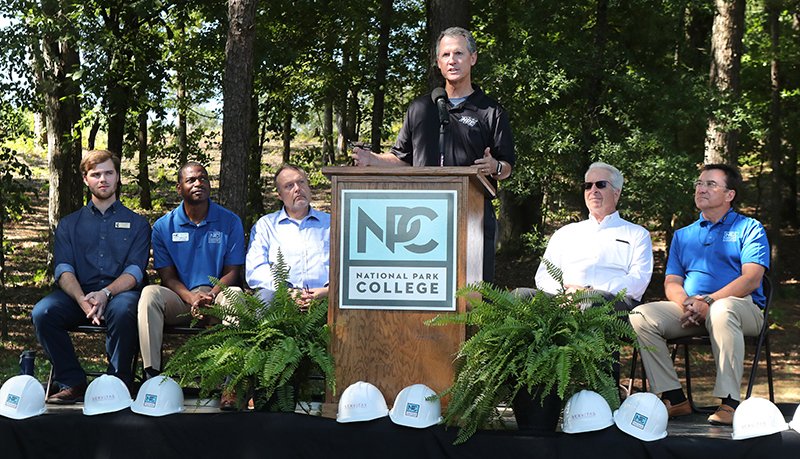 Immediately preceding the groundbreaking ceremony, a trustees meeting was held to approve the name of the building; the vote was unanimous in favor of “Dogwood Hall.”

The board of trustees approved the project in November, selecting Servitas to build and operate the three-story facility, which will be around 49,625 square feet and include 180 beds arranged in a suite-style floor plan. Suites will vary and will include a small kitchenette and shared living space. It is expected to be open to students in August 2020.

“Today is a day that we all know of as the groundbreaking celebration for the new residence hall, but it is much more than that. Today is the beginning of a new era for National Park College: an era of growth and new horizons,” Student Government Association President Harrison Felton said.

Felton said a recent student survey showed that of 600 respondents, 90 percent “said they would consider living on campus.” Additionally, nearly half the respondents said they commute an hour daily to the college.

“On behalf of the student body, which I represent, I would like to thank National Park College for listening and responding to the needs of the students,” Felton said.

He also announced the name of the residence hall after selection by the Residence Hall Naming Team, which consisted of students, faculty, staff and alumni.

“We finally landed on suggesting names of trees found around Arkansas as a possible pool of appropriate names,” he said.

“Trees represent strength, growth, wisdom and knowledge: all qualities of a National Park student as well as this college itself.”

Felton said the dogwood tree was the perfect name for the residence hall since it “represents and symbolizes, among other things, new beginnings, renewal, safety and durability. These qualities and more are what the hall will represent. They are, in fact, what National Park College represents in itself.”

“This will be a game-changer for our students and for the student success equation. It’ll have a profound effect on our campus culture. It will change our image, and really transform the students’ experience,” he said.

“We listened to our students, and today the college is responding to that need for safe, affordable housing options for students.

“On-campus housing is also going to help us with our recruitment efforts and our retention strategy, because with a dedicated living space on campus for our students to stay, my area will be able to expand our recruitment areas beyond Garland County to attract students who probably wouldn’t consider us because it was just too far of a commute,” he said.

“I think today is a victory for our student population, and that’s what I’ll be thinking about as we’re taking the pictures and breaking ground,” NPC President John Hogan said.

“I am grateful that all of you took time out today to come and visit with us. In a year, this is again, going to be a transformed place.”