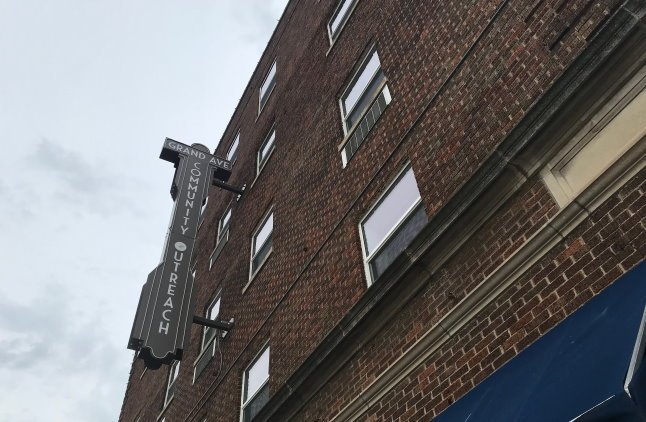 Brown transitioned from board member to director around the beginning of the year. He has since found himself handling many different duties that could be expected of a director: fundraising, public relations, strategic planning, among others.

“The first month that I was here, it was getting myself comfortable with everything that was here,” Brown said. “The building itself, obviously the finances, just getting to know how things tick.”

Of course, there are the occasional odd jobs that many nonprofits demand of any staff member, regardless of title.

On Thursday, that odd job was serving coffee at the renamed Tangney Cafe, formerly Terrazzo Coffeehouse and Cafe. It was the first day the coffee shop was open under its new name and free 12-ounce coffees were being offered in celebration.

The name change – along with a reworked coffee, breakfast and lunch menu – all happened very quickly, Brown said.

That seems to be a common pace at Grand Avenue Community Outreach (GACO) in recent months.

About a month ago, the cafe’s future was uncertain. McCreary’s Creative Catering, which had operated out of the kitchen and provided food for Terrazzo, had left to focus on its catering.

But around that same time, Brown met Jay Dahlhauser, the co-founder of The Bridge of Storm Lake, a faith-based outreach organization in that community that focuses on advocating and supporting children and build relationships spanning Storm Lake’s many cultures.

One of The Bridge’s programs is Endless Sea Coffee Roasting. The new Tangney Cafe now brews coffee from The Bridge and prepares espresso drinks with fair trade, organic beans roast from UP Coffee Roasters in Minneapolis.

“Meeting Jay was just a total bonus in that process,” Brown said. “We were thinking of how can we move forward. We decided we were going to stay open, we’re going to serve food, let’s do something different with our coffee. Then I was introduced to Jay and it just happened to be on the same day that we were talking about getting different beans in here.”

The idea to change the cafe’s name to the Tangney, which pays homage to the family who built the 100-year-old building that’s become a five-story Spencer landmark, came to Brown in a dream.

“I came in and I pitched it to the staff and the board and they were overwhelmingly supportive of that,” Brown said.

So, the change was made.

And it’s just one of many at GACO that Brown and his board of directors have steered the organization toward.

Like the cafe that puts its profits toward funding for GACO’s other community-focused services – a free medical clinic, dental clinic, food pantry and clothing outreach – GACO itself has gone through a rebranding.

The five-story building used to be home to the Dream Center. Before that, it was The Hotel, and Tangney Hotel before that.

The Dream Center started some of the much-needed and popular services that GACO has maintained.

But the Dream Center also had a faith-based treatment program, which came under scrutiny following a suicide attempt by a program participant in 2016. Accusations – and a conviction – of sexual exploitation by the Dream Center’s then-leader followed. The program was ended when the former leader left.

In October 2017, the Dream Center’s name was changed to Grand Avenue Community Outreach. Over time, the organization has begun the process of making a name for itself, while still maintaining some of the programs that were first made successful when it was known by its former name.

Now, GACO provides its programs – like the food pantry that sends out two tons of food per month and the clothing outreach that distributes 2,000 articles per month – that provide undeniable benefits to the community. The free medical and dental clinics are as needed as ever, too, and have not gone anywhere.

Other services that were once offered in the building, such as temporary housing and treatment programs, aren’t offered yet. If they are in the future, then GACO will leave that to experts, Brown said.

“The biggest difference – and I can’t stress this enough because I don’t think people fully understand yet – is instead of us doing and providing all these services, we are providing the space for the experts to do these services,” Browns said. “That’s huge.”

Bringing other organizations under the same roof

Providing a space for experts and other service providers has already become a focus.

First came Birthright shortly after Brown became director. That nonprofit, which provides information and help for pregnant women and women who believe they may be pregnant, is now on the second floor.

“They saw what we were doing and they saw our mission,” Brown said.

Birthright also needed more space, he added. But when they moved into the GACO building, they became involved with their neighbors on the floor – the clinics, clothing outreach and food pantry.

“They saw that connection between our food and clothing and what they do,” Brown said. “Long story short, they rented another office and turned it into their Helping Hands Baby Closet. They provide infant clothing, baby clothing, maternity clothing, diapers, formula, et cetera – all kinds of things that their clientele would need.”

Those organizations show how GACO is, as Brown said, providing space to allow experts to reach people in the community.

“We as Grand Avenue Community Outreach don’t know how to counsel pregnant women,” Browns said. “We don’t know how to be an advocate for victims of domestic violence or abuse – but those people do. We have space for them, so they can come here and do that. And then the idea is that everyone can work together.”

The same could be said for two other GACO tenants, Life Changes Sober House on the third floor and All Those Yesterdays, a fourth-floor occupant.

Life Changes Sober House is a nonprofit in the works led by Gary Wilson. With help from his wife, Lindsay, Wilson is remodeling the third floor.

“It was kind of a no-brainer bringing them here because, again, we have no business being in the sober living environment,” Brown said. “We don’t have the manpower for it, we don’t have the experience for it. That’s just too much for us to handle and, so, it just made sense to provide that whole third floor.”

When done, Life Changes Sober House will offer an addiction recovery program that will help men turn their lives around by kicking their addictions – whether that’s drugs, alcohol, sex, gambling or some other form – but also providing them with skills needed to land on their feet when they are done with the program.

“That’s always been my primary thing: We can put people in institutions, we can put people in rehab centers, but as soon as they’re done with those programs, they just go back out and now you haven’t hit the underlying problem,” Wilson said.

Work on remodeling the floor has not been easy, Wilson said.

“I’ve been working on this for the last four months,” Wilson said. “It’s just been me and my wife doing it.”

Funds can be donated directly to Life Changes Sober House by contacting Wilson at (712) 260-5687 or by email. Donors can adopt rooms that are being remodeled and provide furniture or financing for furniture.

“I wanted it to be something like what you and I would live in,” Wilson said.

All Those Yesterdays fills a void

On the fourth floor, Ryan Jensen is filling a void in the community with his mental health and substance abuse counseling practice, All Those Yesterdays.

Jensen was a therapist and counselor at Compass Pointe in Spencer before it shuttered in April. He had always wanted to start his own private practice.

The decision was simply forced sooner than expected.

“I didn’t expect it to be in April when (Compass Pointe) was shut down,” Jensen said.

Brown is happy to have All Those Yesterdays in the building.

“Having someone like Ryan Jensen (in the building) has been a prayer answered,” Brown said.

Jensen said he feels the same.

“It seemed like a great fit for what this building is trying to do for people,” he said.

The practice has been going very well.

“It took off from the get-go,” Jensen said. “I generally have a full week of clients.”

Those clients range from individuals, to couples, to groups. Jensen enjoys working with clients and seeing them make positive changes in their lives.

“The overall personality change I see with clients if they do the work is my reward,” Jensen said. “It’s so rewarding when that type of stuff happens. And, honestly, it keeps me where I need to be, also.”

Providing for the community

Though GACO is now home to a handful of separate organizations, each one complements its own mission:

Per its website, “The Grand Avenue Community Outreach is an ecumenical, volunteer-driven non-profit organization that provides social services and outreach programs designed to meet physical, spiritual, and long-term needs to people in Northwest Iowa and beyond.”

“Our goal is to change people’s lives,” Brown said. “If someone comes to me and says, ‘I don’t have a way to get food for my family the rest of the week,’ thanks to our donors, we can provide that for someone in this community. Or if someone comes and says, ‘It’s that time of year, back to school and my kids don’t have clothes,’ boom – gotcha covered.”

As GACO continues to move forward, Brown will remain focused on that mission.

“I talk about what we’re doing here now and what we will be doing in the future,” Brown said.

If the first half of this year is any indication, GACO will definitely be an organization to watch in years to come.