Facebook friends each reported nooses at different colleges. One was a damaged power cable.

Stanford University was chastised for not responding in a “timely” and “sufficient” manner to a purported noose found hanging near a campus residence hall earlier this month.

The incident shares a bizarre coincidence with another reported noose that turned out to be a false alarm: The women who reported each incident share the same last name, grew up in New Orleans and are Facebook friends.

The rope (below), hanging on a bush near a building that housed high school students for a summer program, was discovered July 12 by a camp advisor. The initial report by The Stanford Daily said campus police were investigating it as a potential hate crime.

In the days that followed, however, many in the Stanford community voiced displeasure with the reaction and response by school officials.

In an open letter published Wednesday in the Daily, numerous students and faculty complained about the “boilerplate” of Stanford administrators’ initial 148-word statement about the purported noose, calling it a “symbol of violence and racism directed against African American people.”

They blasted the statement’s “lifeless, robotic phrasing” and said there was no indication “the administration ‘deeply appreciates’ the situation at all,” they wrote. (The Daily notes the statement was later amended to include the fact that nooses are “a threat of violence and a powerful weapon of deadly force used during the history of lynchings in the U.S.”)

Three black student senators wrote that the purported noose “is a threat to our happiness, our wellbeing and our existence on this campus as Black students — and to misidentify, misrepresent or even ignore how that manifests is a continuation of the emotional violence against Black people in this country.” 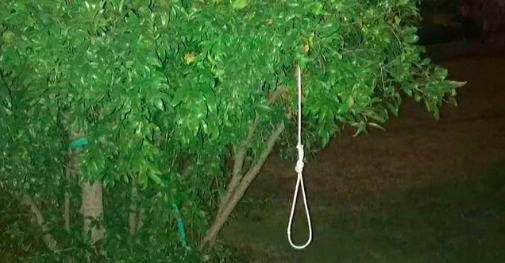 Camp advisor Cheron Perkins, who took a video of the rope, complained that the response by the Stanford Department of Public Safety “just didn’t sit well” with her.

“I felt very uncomfortable about the whole situation,” Perkins, currently a medical student, told the local ABC affiliate “And then once we talked to the police, and they just said, ‘Oh, well we took it down.’ No, there needs to be more done than just taking it down.”

Perkins shares the same hometown and last name as a Louisiana State University student who reported a purported noose on that campus. They are also Facebook friends.

Clarke Perkins alleged in 2015, right after the racial riots that rocked the University of Missouri, that an electric cable with a knot at its end was a “noose.”

After the truth was revealed, she explained her confusion by saying she thought it was a “makeshift” noose, not “professionally made.” Perkins also blamed the racial climate at LSU, saying that “if black students were more accepted here, I wouldn’t have thought [it was] a noose”:

Considering what is currently happening in this country, someone hanging a noose certainly seems plausible. #IStandWithMizzou

A year later, Perkins claimed someone had hung an ornament laced with racial epithets on her dorm door.

This was left on my apartment door today at University House. Absolutely disgusting. pic.twitter.com/aBdjH8gRF1

Clarke Perkins couldn’t explain to The Fix how she knew Cheron. She denied their Facebook friendship when asked in a Twitter message, but when shown a screenshot of her friend list she replied “interesting. but there is no relation.” Clarke said “the name [Cheron] didn’t even ring a bell” and that “maybe we met once awhile back.”

Clarke also told The Fix that authorities “did not” end up finding the person responsible for the racist ornament left on her door. Cheron, who reported the Stanford incident, did not respond to Twitter or Facebook messages from The Fix.

Details from their social media accounts confirm the Perkinses are indeed the individuals associated with their respective noose cases. 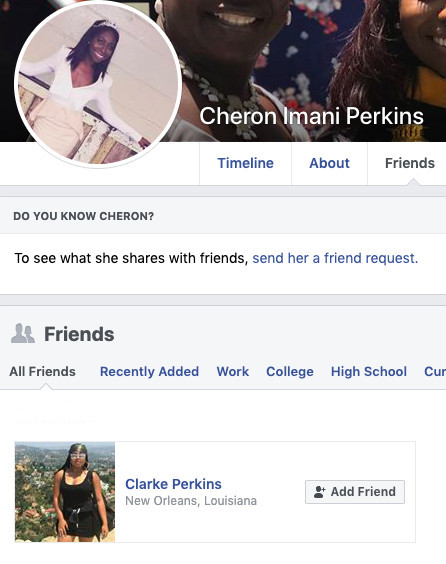 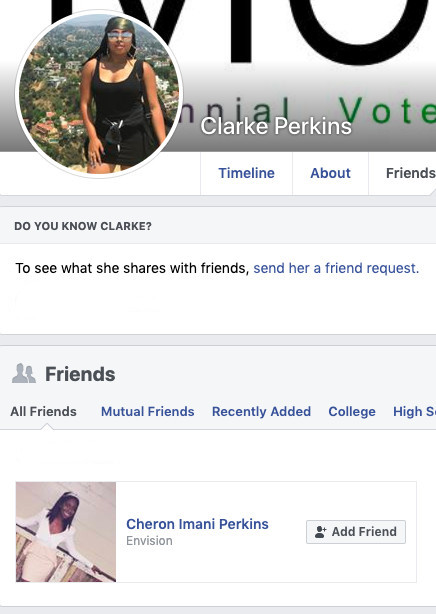 The Fix asked the Stanford Department of Public Safety for surveillance footage of the area where the rope was discovered, and whether there is any indication of a hoax. “Since the investigation is still in a very active stage, we are not releasing any additional information at this time,” spokesperson Bill Larson said.

Stanford officials ended up apologizing on Tuesday for their allegedly tepid response to the purported noose.

“We in the leadership also need to deepen our understanding about our biases, and have a broader diversity of voices contribute to planning and decisions. We recognize that we have much to learn,” they wrote.

The reaction from Stanford administrators, students and faculty is hardly unique.

At Michigan State two years ago, a missing shoelace taken for a noose prompted the president to proclaim that campus cops and the Office of Institutional Equity were “immediately” notified and “promptly” initiated investigations. Then-President Lou Anna K. Simon said that such race-based behavior would “not tolerated on our campus.”

And a year before that at the University of Delaware, an alleged “noose”  turned out to be the remnants of hanging lanterns. Nancy Targett, then-interim president, “pledged further action to fight campus racism regardless of the results of the noose investigation,” student newspaper The Review reported.

MORE: ‘Noose’ at U. Michigan hospital was a fishing knot