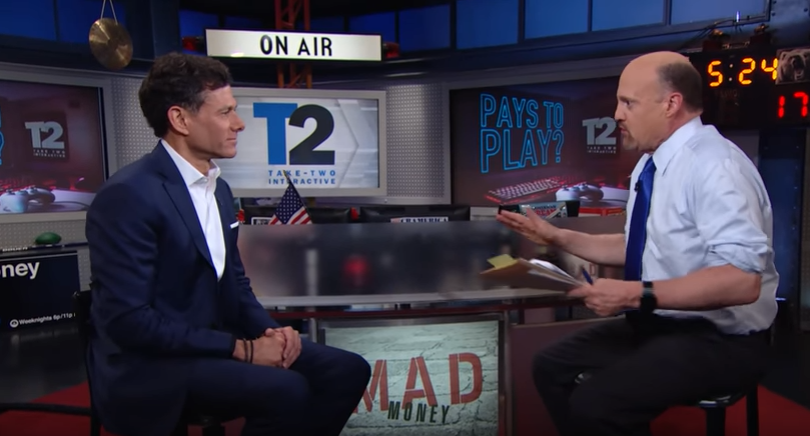 Take-Two Interactive Software has gained more than 10% since reporting better-than-expected revenues in its fiscal first quarter and raising its full year revenue outlook. The company’s upside surprise included a 46% year-over-year increase in net bookings and 39% year-over-year improvement in net revenue. A leading video game publisher, the results were powered by sales from NBA 2K19, Grand Theft Auto V and Red Dead Redemption 2, among other titles.

Red Dead Redemption 2, Take-Two’s Western-themed action adventure game, was launched in October 2018 and has set numerous industry records, including the single biggest opening weekend in the history of entertainment. In a “Mad Money” interview on Monday, CEO Strauss Zelnick detailed the public’s initial apprehension about a Western-style video game and credited strong execution in Take-Two’s ability to generate a warm reception from consumers.

“The conventional wisdom before the launch of the first Red Dead Redemption was, ‘Westerns don’t work in interactive entertainment.’ The truth is if you give an audience something that’s unexpected and fantastic, they show up for it,” Zelnick told Jim Cramer.

Red Dead Redemption 2 boasts 25 million in units sold and is one of the company’s biggest commercial successes.

Novocure is fighting for more than a cure when it comes to its revolutionary cancer treatment. The oncology company has also been working to educate patients and doctors on its novel therapy, which treats aggressive forms of cancer, in order to increase mainstream acceptance.

“Anything that’s new–I’ve been involved in the introduction of stents, ablation therapy for cardiac disease—they all takes a while to get to maximum adoption. But we’re doing remarkably well given how unexpected this therapy is,” Doyle told Cramer in a Tuesday sit down.

Novocure’s Tumor Treating Fields device for glioblastoma, Optune, has seen 18 consecutive quarters of active patient growth and ended its most recent quarter with 2,726 active patients. From a position of strength, Novocure has been able to advance its pipeline treatments for other indications as well.

“We’ve been able to build a nice business that, as you mentioned also, is cash flow positive now, will be profitable very soon, and is paying for all of our development activities in these other cancers,” Doyle said. “That’s a big difference between what we’re doing and most biotechs, where they’re doing great work but they have to raise more money and more money to fund their trials.”

Novocure’s stock has soared nearly 90% in the last three months, and the company saw sales grow 41% year-over-year in the latest quarter.

Keurig Dr Pepper is just heating up, according to CEO Bob Gamgort who refuted the perception that the drink producer was tapped out in the market. The company became the third-largest beverage business in North America following the merger between Keurig Green Mountain and Dr Pepper Snapple Group in July 2018.

“All [the slow down] was was a need for more innovation and good marketing, and that’s exactly what we’ve done,” Gamgort told Cramer.

Keurig Dr Pepper’s stock has risen 26% since it began trading post merger under the symbol KDP in July 2018. Gamgort attributed the company’s revitalization to a combination of renovating brands and bringing new brands under the company’s umbrella.

“There’s always hope for dead brands,” said Gamgort. “It’s about making sure that you renovate those brands, add new benefits to them so that you make them contemporary and bring good marketing to it as well.”

Waste Management isn’t content to let trash waste away in landfills. According to CEO Jim Fish, the largest waste disposal company in North America, is taking a proactive approach to recycling.

“What we’re doing is changing the model, and we’re putting a new plant in Chicago. It takes out those things that we want as opposed to today where a conveyor belt goes by and you’re pulling off the things that you don’t want,” Fish told Cramer.

However, Waste Management has already taken many steps to turn trash into something of value. The company owns and operates landfill gas-to-energy facilities to generate electricity and provides cost-efficient recycling programs for business and households across the U.S. and Canada. While landfills remain the main depositories for solid waste in North America, Waste Management believes it can take further steps to handle waste efficiently and responsibly.

“Waste Management is going to change the way that we sort that material, and I think it really improves the quality of it,” Fish said.

Shares of Waste Management are up more than 30% year-to-date.

Competition in the beauty business has gotten fiercer since Evolus‘ Botox-alternative entered the space. In February 2019, the FDA approved Jeuveau, the first new brand of neurotoxin to hit the market in almost a decade.

“This company was designed from the outset to compete against the market leader. We believe we are very differentiated in our go-to market strategy, not just the science and clinical data, but our digital platform,” CEO David Moatazedi told Cramer Monday

Although the launch is still in its early days, Moatazedi points to doctors’ willingness to adopt Jeuveau as proof of its success thus far.

“There’s always going to be skeptics in any market. What’s unique about the aesthetic market is doctors would not be interested in taking on a new technology unless they believed it had the potential to be sticky in their practice,” Moatazedi said.

In May, Evolus launched the Jeuveau Experience Treatment (J.E.T) with plans to roll it out in 3,000 practices. Within the first 90 days of the launch, Evolus exceeded expectations with enrollment in more than 5,000 aesthetic accounts.

“Our push on the social media side was really the focus initially. It helped around our digital platform. What we’ve seen are thousands of accounts around the country taking our social media content and pushing that out to their patients,” he said.

Evolus has reported more than 190 million media and social media impressions in 90 days.