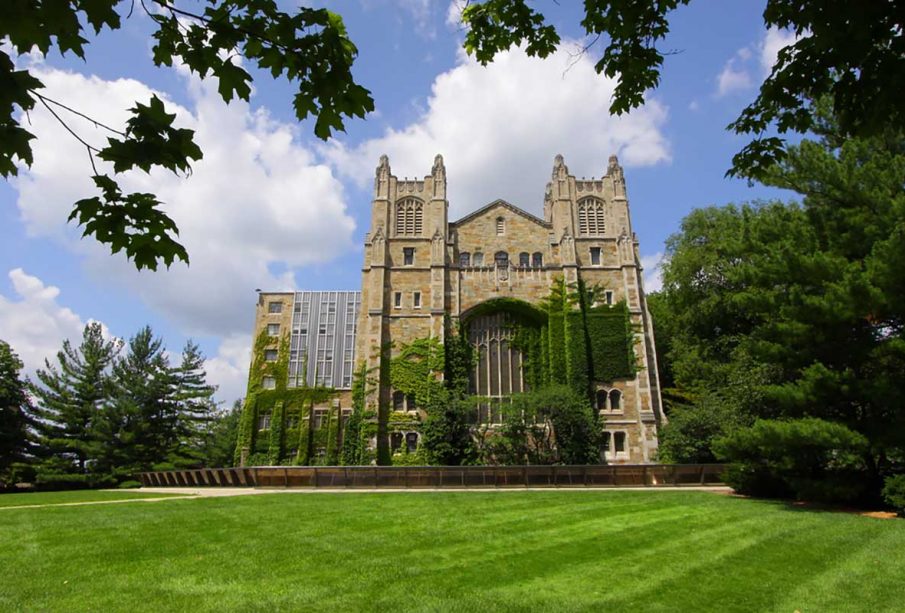 While Tin, the student working three jobs, has not had the same issues with food as Desai, she has noticed differences between her social life and her peers’. She avoids using Uber rides for transportation, opting for walking or taking buses during school hours. She skips eating out with friends except on special occasions, and doesn’t frequent the upscale shops surrounding campus.

Tin grew up in Queens, New York, where the median household income of $64,000 is close to that in the state of Michigan ($54,000), but still about $100,000 less than that of the average U-M student. Neither of her parents went to college. Her father works as a chef, and her mother, is a night-shift janitor.

She came to U-M as a sophomore from the State University of New York Binghamton, where the student body was more economically diverse.

“I’ve kind of gotten used to that very high-class life where everyone around me has money so it’s become a very numb thing and I don’t think about it too much anymore,” Tin said.

When she works late at the Michigan Daily and her co-workers order food, Tin demures. She does the same when friends invite her on weekend trips. Having no car, Tin must live near campus, where rent for one-bedroom apartments can exceed $1,000 a month. Simple things like going to grocery stores ‒ located miles from campus ‒ are difficult without a car given Michigan’s unpredictable weather.

Those accumulated difficulties can have an impact on academic success. The graduation rate for non-low-income students at U-M is 92 percent according to data from the Washington, D.C.-based Institute for Higher Education Policy; for low-income students, it’s 85 percent.

“There’s a gap,” said Mamie Voight, vice president of policy research at the nonprofit.  “Both Michigan and many institutions nationwide can be doing more to make sure that all students have a fair chance at graduating and graduating at the same rate.”

As part of a larger study of public flagships in the Great Lakes region, IHEP examined policies at U-M to understand how they may affect low-income and minority enrollment and graduation. The study found a 10-point gap in the share of minorities at U-M compared to the state’s high school graduates, and  a 23-point gap in the share of low-income students between U-M and other Michigan colleges and universities.

One way Voight said the university could be more equitable would be a shift even more financial aid to needy students. The university distributes 74 percent of aid based on need, while the other 26 percent is based on merit.

“We know from the research that need-based financial aid can help low-income students or working-class students access college and succeed in college once they get there because it helps them deal with the high cost,” Voight said. “Financial aid programs are certainly one piece of the puzzle.”

College costs, though, are a lower barrier for low-income students at U-M than most public and private universities in Michigan. The net cost of attendance, including food and housing, for students from families earning under $30,000 a year was $3,249 in 2016-17, and $9,895 for families earning $48,000 to $75,000. Both were the lowest net costs among Michigan public universities, a previous Bridge Magazine analysis showed.

But money isn’t the only piece of the puzzle, Voight said. Social status and its accompanying insecurities for many students of more modest background have been highlighted nationally in the past year following admission scandals on several elite campuses involving the rich and famous.

“There really is a role to play here for institutions to both enroll low-income students and then make sure campus is a welcoming and inclusive environment for them that sets them up for success once they’re there,” Voight said.

In 2018, the University of Michigan Central Student Government published an affordability guide that unintentionally demonstrated how out of touch some were to life as a poor student on a rich campus. Among suggestions in the guide for saving money: cutting back on housekeeping or laundry services.

Schandevel, the student with the modest cellphone, was one of its most outspoken critics.

“To hear things like ‘just stop spending money’ as advice being given by student government to low-income students was really frustrating because a lot of times we don’t have money to spend at all,” said Schandevel, who comes from a family that had a yearly income of about $30,000 while she was growing up.

“It’s not that we’re spending without thinking about it,” she said. “It’s just that we’re coming here with not a lot. I think that was … a breaking point for a lot of people.”

The controversy led Schandevel to start her own affordability guide, called “Being Not-Rich at UM,” which allowed low-income students to speak to their experiences. The guide proved to be immensely popular, prompting students at other schools including the University of Texas at Austin to start “being not-rich” guides of their own.

That was not her only contribution to changes on campus. By the end of her freshman year, Schandevel had begun to advocate with friend Meghan Wheat to launch a social class and inequalities studies minor. It’s now offered in the Women’s Studies department.

Such activism is not uncommon among students like Schandevel.

“They are risk takers and they are boundary crossers,” said Dwight Lang, a U-M sociology lecturer, and a faculty adviser to the student group First-Generation College Students @ Michigan, which includes many low-income families.

“It takes a lot of guts for a first-gen to come to a campus where 10 percent or less of the students are first-gens, and they immediately recognize they are different in multiple ways.”

Part of the university’s challenge, according to Lang, is changing outside perceptions about the kinds of students it’s seeking. In the past, the university has been seen as unattainable and unaffordable and, while these stereotypes are still discussed in communities across the state, the university’s active recruitment of low-income and first-generation students is helping to alter those beliefs.

The Go Blue Guarantee and HAIL Scholarship are two examples of programs to actively recruit low-income students that would have been unheard of a decade ago.

A new program within the College of Literature, Science and the Arts provides a laptop for every student who cannot afford one, shows U-M is moving in the right direction, Lang said.

Other programs at the school and involving student organizations, like the Maize and Blue Cupboard, a grocery store-style food pantry open to students, also help alleviate obstacles.

Students also acknowledge the benefits that come with attending a university with an $11 billion endowment. Tin, for example, was able to go to Italy last summer with the help of her financial aid package and a scholarship through the College of Literature, Science and the Arts. Combining these two financial sources, she was left paying only for flights and daily needs.

Schandevel received U-M funding for summer opportunities in the past, which allowed her to pursue unpaid work in her field of study she would have had to pass on otherwise. And she received housing assistance while interning in Washington, D.C. last summer through another U-M program.

Such supports help equalize opportunities for U-M students of lesser means, who would otherwise have to pass on, say, unpaid internships that build resumes and lead to future job offers. Ten years after enrollment, former U-M students from low-income families earn just $3,300 less per year than students from higher-income families ‒ virtually eliminating the wealth gap with which they entered Ann Arbor.

“The job market is just like a completely different place if you’re a high-income student or a low-income student, and the internships and fellowships and jobs that you have in college really do matter,” Schandevel said. “If you’re not able to have an unpaid internship ‒ and most [internships] are unpaid ‒ that’s an opportunity for a job that you’re not getting.”

She said she cut corners every way she could so her parents ‒ a father with a high school diploma and a mother with an associate’s degree ‒ wouldn’t have to find money in their tight budget for her education. Still, they’d occasionally drive from Warren to Ann Arbor to bring her homemade lo mein and spanish rice when money was low.

By the time Schandevel ended her senior year this spring and started a full-time job as a community organizer, she had learned to overcome her initial insecurities and had taken pride in her identity as “the campus poor girl.”

“There were moments where I was like, ‘Maybe this isn’t for me, maybe I don’t really belong here,’” Schandevel said. “But the more I realized that those feelings came from socioeconomic differences … the more secure I felt in myself, and in my background, to navigate college. Now I feel really proud of where I’m from, and how much work I put into coming to a university like this.

“That’s why I’m fighting so hard,” Schandevel said, “so that other low-income students can do the same.”

Correction: A previous version of this article misstated how the University of Michigan distributes student financial aid. It has been updated to reflect that 74 percent of aid is awarded based on financial need and 26 percent based on merit.

Alex Harring and Sammy Sussman are students at the University of Michigan. This story originated as part of a journalism class project overseen by Bridge senior writer Ron French.