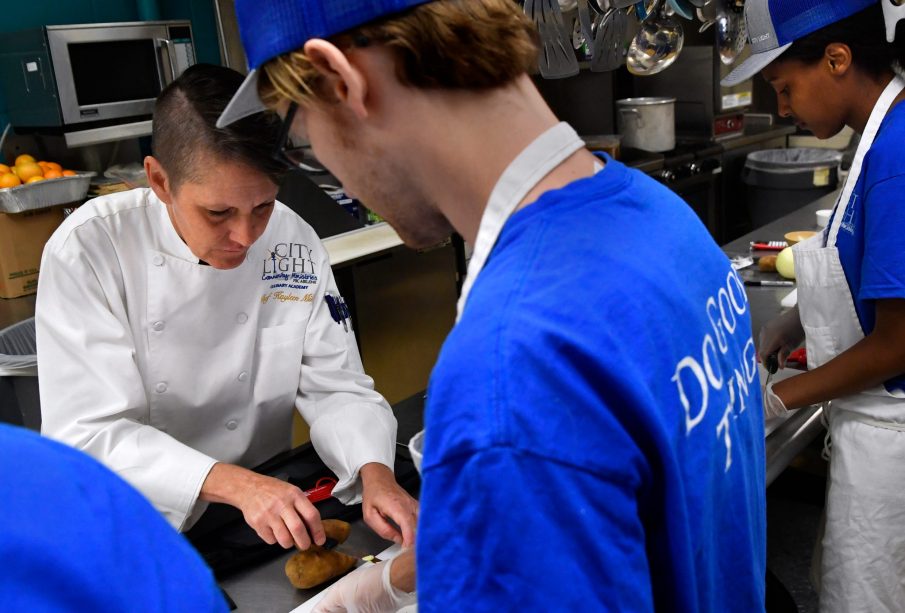 They say the proof is in the pudding, but is it also in the creme brulee with fresh berries and whipped cream or herbed spaghetti squash? Or baked macaroni and cheese with shrimp or chicken?

If so, students in the first session of the new Culinary Academy sponsored by First Baptist Church’s City Light Community Ministries already are a success and they haven’t even finished their classes.

The scrumptious “proof is in the pudding” meal was served July 11 to supporters of the new academy, which is free to students who are accepted.

The five students in the first class did all the planning, preparation, cooking, serving and cleaning up for the meal.

The guests were happy to oblige as they dined on the luncheon served in the City Light dining room. The menu also included Caesar salad, potato salad and steamed broccoli. Director for the program, Kayleen Mills, was thrilled with the results. Everything was created from scratch, including the dressing for the Caesar salad.

“We made them get the anchovies and cream them up,” Mills said.

The Culinary Academy is designed for people with barriers to employment. Ideally, Mills said, eight students will be accepted for each 12-week session, with three sessions scheduled per year. Eight students is a few too many for the current space, but some may drop out, Mills said.

First Baptist Church has purchased its neighbor church, First Christian, and eventually will use FCC’s activity center and a new building to house City Light Community Ministries. When that happens, the Culinary Academy can expand.

Texas State Technical College has offered courses in culinary arts at the restored T&P freight warehouse, but that program is being phased out, Lynda Lopez, executive director of communications for TSTC, said in an email.

“TSTC is sunsetting this program,” Lopez wrote. “We are teaching out the last class.”

The program will end when every student is “taught out,” she wrote, and that could take as long as a year.

A brochure with information about the academy carries a message on the back: “By investing in people and building community, we transform homelessness, hunger and poverty into human potential.”

The current five students most likely would give a hearty “Amen!” to that statement. In addition to learning culinary skills, they also learn life skills that are necessary for obtaining and keeping a job. It’s evident, the life skills lessons already have taken hold.

“Yes, Chef Kay,” they respond when asked a question by Mills, the academy director. If they want to say something or ask a question, they raise their hand and address her as “Chef Kay.”

They also are mastering the basics of the culinary arts. During a recent class, the students listened intently as Mills taught a segment on “Cracked Wheat and Other Grains.” If the grains sound hearty, Mills advised, they will need more water and cooking time.

Each student in the class is provided a City Light Culinary Academy cap, T-shirt and apron. Each gets a black canvas bag filled with basic culinary knives, thermometer, set of measuring spoons and other necessities.

Thresa Carson-Graves, 57, is taking the class, though she already is employed at a restaurant. She also volunteers to assist people in their homes through her church and hopes one day to own a food truck. Mastering the terminology, skills and “tricks of the trade” that come from learning under someone with Mills’ experience is appealing to Carson-Graves.

“It’s something I’ve always wanted to get into,” she said. “I can use the skills in the job I’m in now.”

Brenden Turner, 18, got a General Education Development certificate after dropping out of high school. Mills is his aunt and she emphasized to him that the food service industry is something he can succeed in.

“Food service is one of those industries where all you have to do is work hard,” she told her nephew, as well as all her students.

Turner wants someday to go to nursing school. But no matter where he ends up, he knows the skills he is learning now will be useful.

“This is a skill that is necessary for life,” he said.

Mills has been there, cooked that

Turner couldn’t have a better teacher — both in the kitchen and in life — than his aunt.

A 1993 graduate of Abilene High School, Mills, 44, had dreams of attending Baylor University and becoming a doctor. She had excelled in AP or Advanced Placement classes that would be needed in medical school.

Much to her surprise, Mills said, she learned she would have to find a way to pay for an education at Baylor. That never happened and Mills instead continued working at Long John Silver’s restaurant.

“It was a high school job that turned into management,” she said.

A move to Stephenville was required for a management position. By that time, Mills had a young child and even a management job didn’t pay well enough to make ends meet. She moved back to Abilene to live with her mother. Her dad had died when she was in high school.

“That’s where my true love of the kitchen started out.”

Mills got just enough taste of management to know that wasn’t for her. Back in Abilene, she got a job at the former Black-eyed Pea restaurant.

“That’s where my true love of the kitchen started out,” Mills said.

That led to getting a degree in 2006 from the former Le Cordon Bleu College of Culinary Arts in Chicago. When Mills’ sister was killed in a car wreck in Abilene in October 2007, she knew she needed to return home. By then she was the mother of three boys, then aged 14, 10 and 6.

Back in Abilene, Mills worked at several restaurants and then was hired to teach at TSTC’s culinary arts program in Abilene. Enrollment always was low, Mills said, and now the program is being phased out.

Then, Mills saw an ad for program director at the new City Light Community Ministries Culinary Academy. At the July 11 luncheon, she told the guests she couldn’t believe her good fortune when she saw the ad for the job.

Mills knows from years of experience that working in food service can lead to a better life. She pulled herself out of poverty by starting to work at Long John Silver’s while in high school and continuing to learn and grow. Now, she gets the chance to help others do the same.

“That’s why I believe in what we’re doing here,” Mills said.

The next culinary academy class will begin Aug. 26. Anyone interested in the 12-week course is urged to pick up an application form at City Light Community Ministries, 336 Hickory St. Or call 673-6686, extension 103, for more information.

Applicants will interview with Kayleen Mills, academy director. The course is free and is designed for people with barriers to employment, including the homeless. Classes are taught 8:30 a.m.-3 p.m. Mondays-Thursdays. Students who successfully complete the course will be certified to work in the food industry at a higher level than fast food restaurants.