On surveys, parents believe they are doing a great job helping teens be more independent, but today’s kids are just too immature.

That last part is probably not true. It was overwhelmingly people in their mid-20s who won World War II and put man on the moon, we’re the ones who’ve now decided that age is not mature enough to buy health insurance. If we want to do the dishes it is the nature of other human beings to let us do the dishes, because other people think that makes us happy. Believing that someone else will eventually want to do the dishes when they mature is wishful thinking.

We’re in a playdate parenting culture, where hyperventilating news coverage makes it seem like any kid outside without a Ring camera on them at all times will be kidnapped, only paid experts can fill out college applications, and without Non-GMO Project certified avocado toast points as a snack they’ll be ill-equipped to survive in the world of toxins and chemicals they once saw in an Erin Brockovich movie. It’s hard to imagine in that environment that parents with any sense of realism, much less 97 percent as in a recent survey, believe they are preparing their children to be more independent.

Yet they do think they are. And then 61 percent lament the kids are not mature enough to be more…mature. Only 25 percent of the nationally-representative sample of 877 parents of teens concede such immaturity might be the result of over-parenting.

What might explain the need to be over-involved? It’s speculation at that point but Americans have fewer children today and if there are two parents and two kids, each child is getting a lot more attention than the middle kids in families of six used to have. There is also more money; poor people in the U.S. have more square footage in their residences than the middle class in France, have flat screen televisions and can afford enough food to be fat.(1) That means more kids have more opportunity to delay things like jobs and bosses(2) – and often do, unless they work in a family business.

Modern parents acknowledge that kids will need to make mistakes to grow, but the mentality seems to be it can’t be important. You know, actual mistakes, with any consequences. That is a video game, not life. (3) 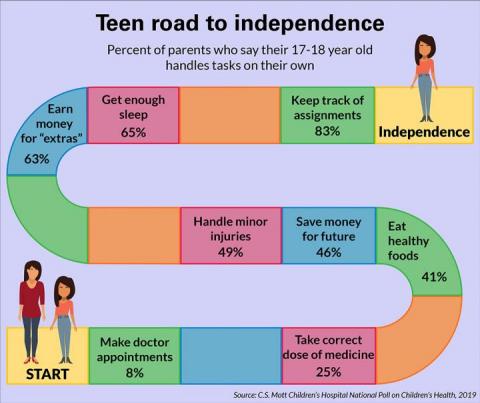 We have a better world than ever. Food is cheaper, video games are better, televisions are better, I do not want my kids having to split wood for heat, but that and farming are why I went to college. I was an organic farmer before the Organic Foods Production Act even existed. It was called being poor. And we see some teens are motivated by money but it’s hard to know if that is really extra chores or the kind of things families just do so one person (overwhelmingly mothers) aren’t oppressed.

“This process of transitioning from childhood to adulthood includes everything from preparing for work and financial responsibility, to taking care of one’s health and well-being. Our poll suggests that parents aren’t letting go of the reins as often as they could be to help teens successfully make that transition,” says poll co-director Sarah Clark, M.P.H.

I can put it more plainly, because I was in a family that wasn’t going to do everything for me. Young people will conquer dictatorships and send us to other planets, if we let them. Yet that won’t happen if we listen to the American Academy of Pediatrics and believe that kids can’t even walk to school until age 10. We’re the most over-medicated and over-diagnosed country in the world, and suffocating parental styles will only make nervous kids more anxious.

We can all start to prevent future mental health diagnoses and obesity from happening in small ways, like showing kids how to do laundry.

(1) This insecurity must have been creeping in for a while because it now affects even the top end of earners as well. Only 13 percent of multi-millionaires in the U.S. say they feel rich.

(2) In this decade we declared that until someone is age 26, the average age of the soldiers who won World War II and were behind the advanced technology that put the man on the moon, they are not even mature enough to buy their own health insurance, so it is little surprise parents feel like their children can’t put on a bandaid without them or read the dosage on a medication bottle without assistance. What is odd is that parents think it is inherent to the kids.

(3) I broke a lot of bones as a kid (and my nose has been broken three times, as anyone who sees me can attest) but it broke my heart when my kid got his wrist in a cast after an unfortunate gym class. Still, I am shocked if I see someone my age who has never broken a bone. Did they do nothing as a child? Today it is different, my youngest is 14 and has never had a meaningful injury. It’s not because I am hyper-vigilant, if they declared they were going outside to play I’d be thrilled, but though we split wood, they use saws, circular and chain, they drill, and they help repair wiring, those are all here and there on the occasional weekend, as learning exercises. They are not life. My house was entirely heated by wood in Pennsylvania, that was life, not learning to be well-rounded.  And I don’t want that for them. But they are walking to school.