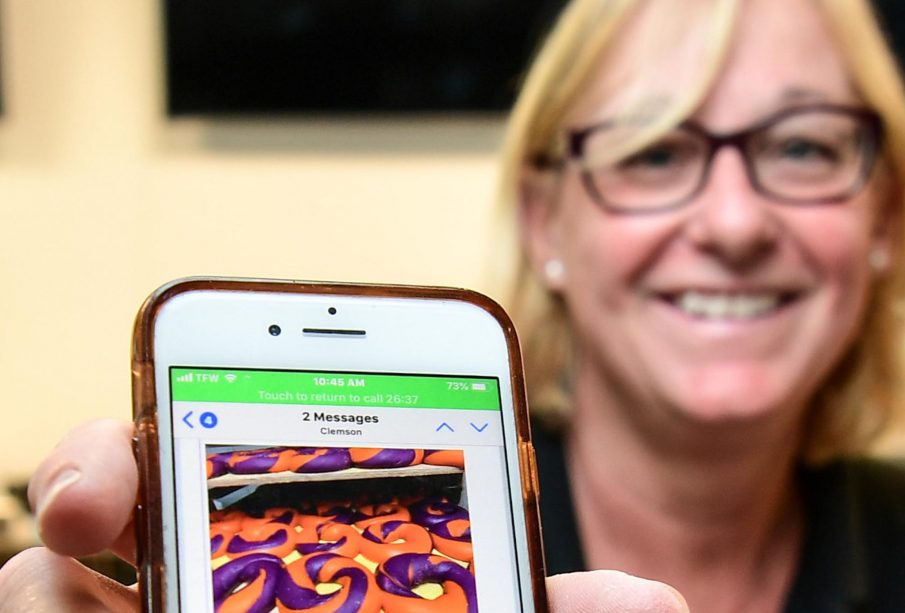 Clemson’s incoming freshman class may never taste a Western Sizzlin’ steak or grab a late night pizza at Little Caesar’s downtown, but they will have purple and orange bagels to snack on.

NYC Bagel & Sandwich Shop is among the restaurants set to open before students arrive back in Clemson.

Marmie Kreps and her husband invested in the New York-based franchise about a year ago as a source of extra retirement income.

Last Friday, Kreps retired from a 43-year career in nursing.

“This is a little thing that we could do on the side and keep us busy and keep us young,” she said.

Owner Marmie Kreps shows the NYC Bagel shop’s National Championship bagel, one of many types of food items as she prepares for an August 31 opening at 125 U.S. 76 at the Granmarc complex in Clemson.  (Photo: Ken Ruinard / staff)

They picked the location on Anderson Highway in front of the GrandMarc housing complex for the available parking and proximity to a bus stop, Kreps said. They also saw a lack of deli options in Clemson.

“The one thing we always missed when we came down South was a good bagel,” said Kreps, who is from Michigan.

The bagels for the shop are par-boiled in New York and then baked at the shop. Kreps said the purple and orange “National Championship” bagel was her husband’s idea. They saw the franchise made rainbow bagels and figured they could put a Clemson twist on it.

The shop is planning for a soft opening the week of July 29, and Kreps said they are still deciding on their hours.

BUILD AN APPETITE FOR LOCAL NEWS

We keep you updated about the local food scene. You can support local journalism by becoming a subscriber. Here’s our special offer.

Beyond bagels, Kreps said they want to cater to late-night student tastes and have wings and pizza on the menu in addition to nachos made from bagel chips and either beef or pastrami.

Bagels aren’t the only change in town. Between the start of the fall 2018 semester and the fall 2019 semester, a number of businesses have turned over in and around Clemson. Here’s a round up of some of what’s happened in the last few months.

In the middle of July, Western Sizzlin’ closed after more than 35 years. The property was sold for just over $1 million, and the agent on the property said she anticipates a “long-term national chain restaurant” tenant to fill the space.

Paw’s Diner in Seneca announced it would close at the end of June to focus on owner George Cheros’ health. Cheros opened the diner in 1998. He died in July.

The Little Caesars Pizza on College Avenue was known for its late-night fare for students. In December, it closed after eight years in business.

The sub spot also shut down its College Avenue location over the summer.

In a statement, the company told The Greenville News it had closed the location following the expiration of its lease.

Ivette Faulkner from the company’s public relations firm said the owners “are exploring other business ventures at this time, but are still Firehouse Subs franchisees.”

The shop at 125 Anderson Highway is set for a soft opening the week of July 29, serving up everything from egg and cheese sandwiches to reubens.

The distillery at 128 Exchange St. in Pendleton won’t serve up food, but it will sell rum. The business was originally set to open in June, but is now on track to open at the end of July co-owner Ernie Wagner said.

Wagner said the building passed all of its final inspections Wednesday morning.

Evolve, now open, is filling the space vacated by Brioso Fresh Pasta at 360 College Ave. The pasta restaurant moved to a new location in Powdersville in the spring after 11 years in Clemson. Brioso’s owner Ray Stratford told The Greenville News the location had become miserable for his business due to construction on State 93.

Evolve’s menu includes salad, takes on southern classics like pimento cheese fritters, shrimp and grits and a fried green tomato BLT as well as items like short rib and shrimp with main dishes priced from $17 to $23.

“The big thing with me too is I didn’t want to just be a bar,” co-owner of the franchise Rion Mimms told The Greenville News in May. “I wanted it to be a place where you go eat with your family, maybe have a couple drinks but that it’s a good place to go for anyone.”

Lillia Callum-Penso contributed to this story.