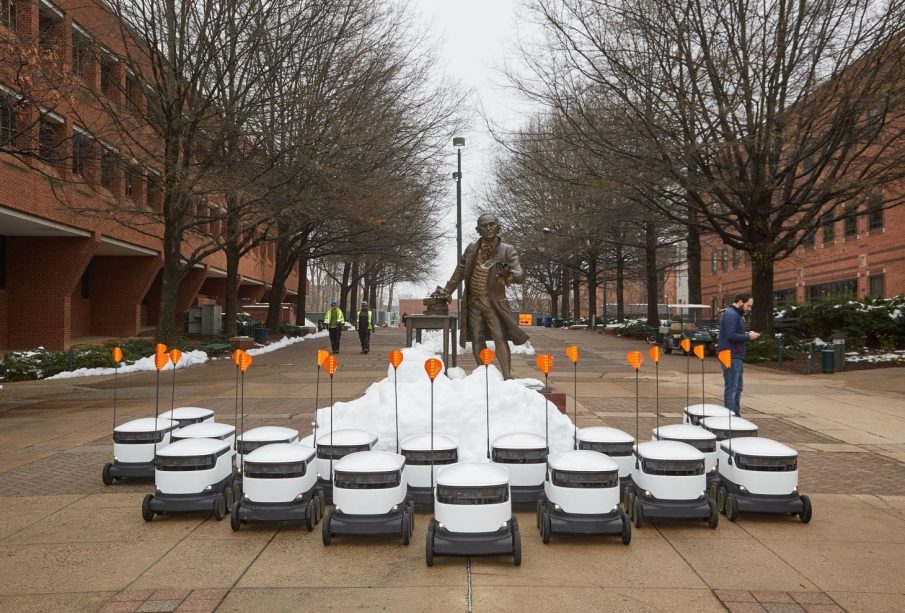 The little white robot on wheels began its journey outside Blaze Pizza.

Hanging a quick right, the machine rolled past groups of hurried students, over sidewalk cracks and twigs, down a ramp, up a hill, and across a two-lane street — pausing briefly to “look” for cars.

Fifteen minutes after departing, the robot arrived outside Commonwealth Hall, a freshman dorm on the northwest side of the George Mason University campus, where Shamor Williams was waiting. The hungry 19-year-old had never ordered lunch from a robot before, but the Internet technology major operated like a pro. Casually opening the device’s lid with his smartphone, he removed a 10-inch cheese pizza, pausing only to reflect upon his novel encounter with a semiautonomous machine when asked.

“It’s technology. It’s really simple,” he said, shrugging matter-of-factly as a 68-year-old professor, wide-eyed and smiling, stopped to marvel a few feet away.

“Thank you! Have a nice day!” the robot cheerfully exclaimed before rolling away.

It’s hard to say how a fleet of robots suddenly appearing on a college campus may have been received five or 10 years ago. But in 2019 — when robots are piloting vehicles, tending bars, baking bread and prowling grocery stores — the arrival of 25 Igloo cooler-sized delivery robots elicits curious glances and smiles from most students but little else. (To be fair, occasional robot head-patting and photo-taking was witnessed.)

That isn’t to suggest the machines — created by the Bay Area start-up Starship Technologies — went unnoticed. Quite the opposite.

During their first day in operation Tuesday, the demand for robotic delivery services from four campus dining establishments was so great during dinner hours that school officials had to pull the plug, shutting off orders so that robots weren’t operating late into the night, far behind schedule.

The company — which says its 4 mph robots can make deliveries in 15 minutes or less — says the Fairfax, Va.-based school is the first campus in the country to incorporate robots into its student dining plan and has the largest fleet of delivery routes on any university campus. The machines are much more than a novelty, campus officials said. As a growing number of students use delivery services like Uber Eats and DoorDash, the robots are the spearhead of an ambitious plan to keep some of that business on campus, a model that could be replicated elsewhere.

“We’re trying to say, ‘Why can’t we do it and capture part of those sales also?’ ” said Mark Kraner, executive director of campus retail operations. “It will benefit the students and the businesses paying rent here on campus.”

How does it work? The robot’s $1.99 delivery fee — which students can pay through their meal plan — goes to Starship Technologies, and GMU receives a percentage of the food sales. Put simply: More sales means more money for the university.

The robots will also provide campus officials with valuable data showing what time students are eating, where that food is coming from and how meal plans are being used. Though that information won’t be monetized by the school, Kraner said, it could lead to changes in how the university serves students.

The data is already arriving in droves. In addition to its normal orders, Blaze Pizza alone received about 50 robot delivery orders on their first day in operation, according to the chain’s local manager, Ricardo Rivero. GMU students regularly place orders online before trekking to the student center on foot to retrieve their food — often a 10-to-15-minute journey each way. Within hours of the robots arriving, Rivero said, student behavior was already adapting to the machines.

“The big change is going to be that students don’t want to leave their dorms,” he predicted.

Not everyone on campus was thrilled about the fleet’s arrival.

“I think they’re pretty innovative,” said a groundskeeper who declined to provide his name for fear of losing his job. “I just hope nobody becomes unemployed because of them.”

University officials said the robots would not displace human workers. They pointed out that demand for delivery robots has already created a new occupation on campus: “Robot runner,” the individual tasked with placing food orders inside robots, locking them up and sending them on their way using a tablet. Jeff McKinley, district manager for Sodexo — a company that manages food services for GMU — said several robot runners have already been hired and more positions are expected to open as new campus dining outlets join the delivery program.

“It’s a great position for a student,” he said.

[Hungry between classes? On this college campus, robot vending machines are delivering snacks to students.]

Critics have accused delivery robots of encouraging laziness and giving a generation glued to their phones another excuse to avoid human interaction. Tuohy said he strongly disagrees, arguing that the Starship fleet appeals to busy people, not lazy ones.

“The robots are really about giving people back the gift of time,” he said. “Imagine you’re a student and you have an hour between classes and you have to either study or write a paper or do some sort of work, but you’re hungry. If you have to spend that hour going somewhere to get food, waiting in line, and coming back, you didn’t accomplish your work.”

Though GMU may seem like an unlikely location to launch a robotic fleet, Tuohy said it’s ideal. The 800-acre campus has wide sidewalks and is ADA-compliant, with ramps and curb cuts that make robot navigation possible. The university is also a 30-minute drive to Washington, where Starship’s remote monitoring center is located. At the center, “human teleoperators” monitor the robots from afar. They can take over the machine at any moment or use two-way audio to communicate with people near the machines, Tuohy said.

The monitoring capabilities are partly why Kraner said he isn’t worried about vandalism or theft. The robots are embedded with GPS, alarms and cameras. Those cameras normally obscure human faces to protect people’s privacy, but that feature can be disabled in a theft situation, which Kraner considers unlikely.

“What they’ve seen elsewhere is that when a robot gets knocked over, the people going by will set it back up,” Kraner said. “People think they’re cute, so they’re going to protect them.”

After witnessing his first robot food delivery outside Commonwealth Hall, John Farina — the awestruck associate professor of religious studies watching Shamor Williams retrieve his lunch — said he is concerned about the machines’ impact on human interaction. In class, he said, students engage with one another far less.

“They get out of class, they whip out the cellphones and bump shoulders with one another,” he said. “I could give the same exam year after year and not worry it’s going to be passed around.”

New technology is often accompanied by new benefits, he said, but society needs to remain keenly aware of what it strips away, especially in an educational setting.

“I’m not anti-technology,” he added. “But you want to create a community of learning, a face-to-face experience of sharing ideas and carrying on discussion about those ideas. That’s why we’re here.”