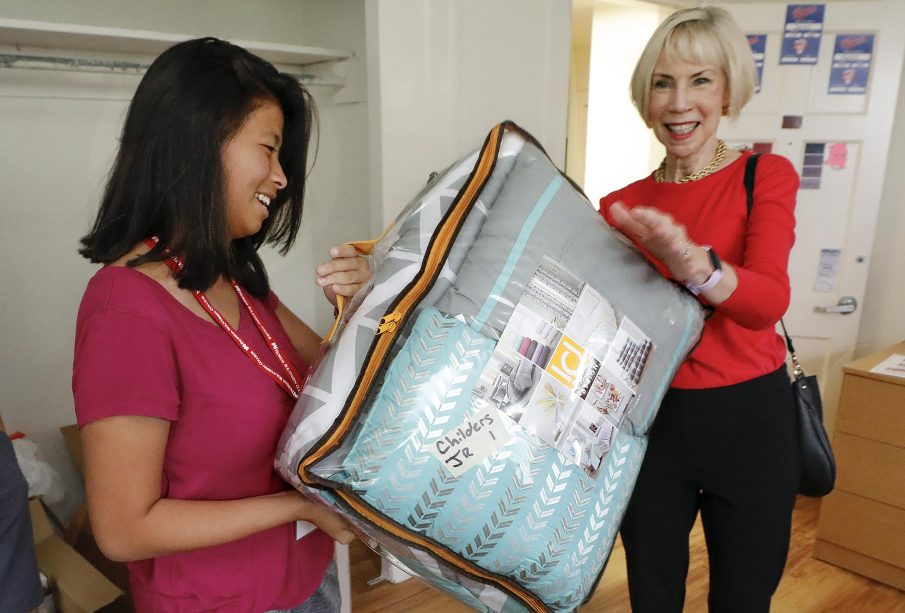 LAKELAND — Florida Southern College welcomed more than 800 new students on campus Saturday during  “Freshman Move-In Day,” and all hands were on deck to make that happen.

About 200 student athletes and ROTC cadets joined coaches, faculty and staff to provide a concierge service.

A steady line of carts, small trailers and students on foot carried bedding, boxes, luggage, and items students brought for their dorms.

Athletic and Wellness Director Drew Howard said the concierge service “is a great opportunity to have a really good impression for 700 freshman.”

“It is the most exciting day of the year and we’ve got our whole team helping. We have come together to get our new folks in and off to a great start. This is one of those special communities, you don’t find this at other places,” Kerr said.

Kristina Bass had dropped off one child at another college, and described that experience as “chaotic.” Not so at FSC. “The service here — this is awesome.”

Freshman Catherine Childers was busy unpacking in her dorm and was amazed at the speedy move-in. “Everything is super quick,” she said. This year, she begins her exercise science studies with an emphasis on physical therapy. Her brother, Dean Childers, already has graduated, with a degree in healthcare administration, she said.

Resident Advisers were on hand to help students find their dorms and get settled in. Allison Tracey, head RA of Nicholas and Wesley halls, said this is the first time many students get a chance to see what community living is like. She said it is really important for RAs to build a connection with students right off, so they feel at home. Many of her former residents are actually now her best friends, she said.

Anna Tingley, also a RA, was a freshman last year. She thinks the most important aspect of being an RA is to help newcomers “find themselves” and find their place on campus.

A marine biology major, Tingley said when she sees a student who does not want to come out of their room, whether for fear of new activities or the sense of unfamiliarity, she offers to attend activities with them.

Some examples of extraordinary student achievements shared by the college’s public relations office include Candice Mastykarz of Wesley Chapel, who was accepted by five different Florida colleges and received an Anne Frank Humanitarian Award while at Zephyrhills High School from the Florida Holocaust Museum for her work in community service.

Another student has a perfect ACT score, Gabrielle “Gabby” Sumner, who arrived at FSC from Savage, Minnesota.

She will be majoring in business administration with a minor in Spanish.

The arriving Class of 2023 has a collective average high school GPA of 3.76 and average SAT score of 1202, and includes students from 37 states and the territory of Puerto Rico, as well as from 18 countries.

“We are a community here,” said Hollingshead, strolling through the Joseph-Reynolds Hall. ”Many hands make for light work.”

One advantage of living on campus is there is always something to do, he said.

“We keep them very busy while they are here,” he said, pointing to a board with several months’ worth of extracurricular activities such as theater, dance and music offerings.