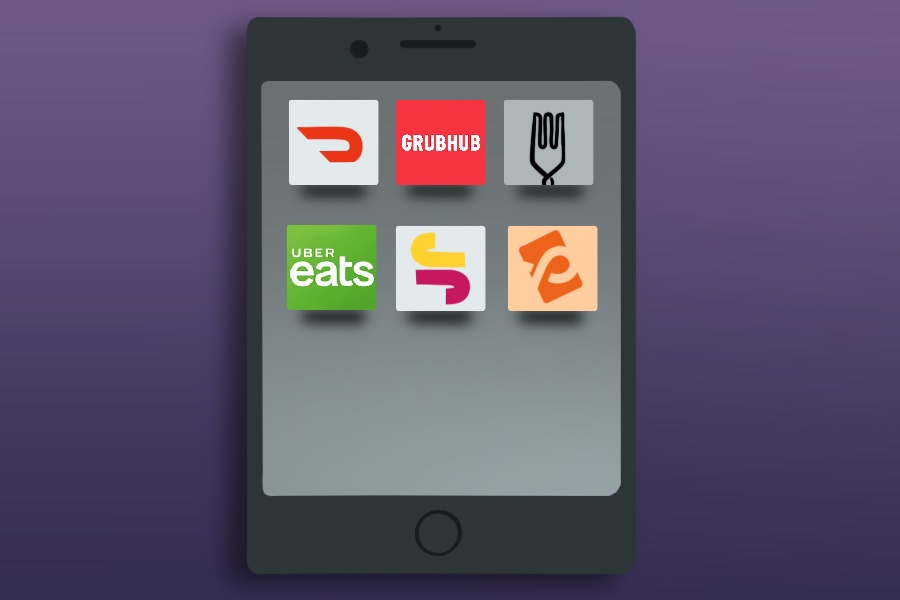 First-year students discuss the role of apps like UberEATS, DoorDash

Food delivery services such as Postmates, DoorDash and UberEATS that have started in the past 10 years have become increasingly popular. Although plenty of eateries offer their own delivery services, these apps allow users to easily browse through a multitude of options — and who better to utilize them than tired, stressed students? For first-year students living in the dorms, food delivery apps can be convenient when the Dining Commons are closed, when they don’t have a weekend meal plan or even if they just want a break from DC food.

For first-year biological sciences major Ritika Gupta, who has a five day meal plan (for weekdays only), ordering food can be convenient on weekends. She also said that since the DC closes at 8 p.m. on Fridays, even though she has a meal plan for that day, it can sometimes be more convenient to just order dinner. Gupta has used UberEATS and DoorDash but said that she’s had more success with DoorDash and prefers their options. There are Thai restaurants that Gupta likes, but Red 88 Noodle Bar is Gupta’s favorite place to order from.

“Fun fact, that place is an actual bar, so you can’t get into it unless you’re 21,” Gupta said. “The food is really good though, so you just DoorDash it and it works.”

DoorDash has food from over 130 restaurants in Davis, including many of the 2018 Best of Davis eateries such as Crepeville, Ike’s and Taqueria Guadalajara. Meanwhile, UberEATS offers delivery from around 40 restaurants in Davis. GrubHub, which is most popular in New York and Chicago, according to a 2017 Vox article, offers delivery from around 30 places in Davis. That same Vox article discussed the “fractured market” of food delivery services and indicated how different factors affect what platform is popular in different locations.

First-year managerial economics major Riya Jain used to order from UberEATS a lot more because her dad works for Uber. Since Uber employees are given $200 a month to spend on UberEATS and in addition to Jain’s dislike for the vegetarian options provided by the DC, she ordered a fair amount from UberEATS during Fall Quarter. She tried, however, to cut down during Winter Quarter.

“I personally dislike the Dining Commons,” Jain said. “They have less variation of food items for vegetarians, at least. They have pizza and [vegetarian] burgers, or something. Most of my classes end after 8 [p.m.] […] so I literally only have salad or pizza left [during late night], so I would prefer to go out or order [with] UberEATS.”

Jain says that she found herself spending more money than she wanted to, so after a while, she decided to refrain from ordering on UberEATS. Instead, she and her friends prefer to go out and avoid that pesky delivery fee, or they will order from Domino’s, which gives a lot of coupons.

“[Now] we usually go out, actually,” Jain said. “We walk and we go to KetMoRee, Thai Canteen, Chipotle or Panera.”

First-year animal science major Juan Carlos Guerrero said that he uses food delivery apps “not frequently, but sometimes.” When he does order, it is through UberEATS, and he buys from Wingstop, Panda Express or Davis’ Piñata Mexican Grill.

“I use UberEATS because I’m kinda lazy to go to the [DC],” Guerrero said. “And it’s convenient because they bring it to you and you don’t have to go anywhere.”

Guerrero said that ordering food from outside is, in part, due to the repetitivity of the food at the DC, and on the days that he would prefer not to eat food from the DC, he considers using a delivery app to be far more convenient than going out to eat. There’s probably one thing that is the most important consideration at the end of the day, though, and that is cost.

“[We go with] whatever’s the cheapest option,” Jain said. “I’d say that that’s the optimal method for eating.”