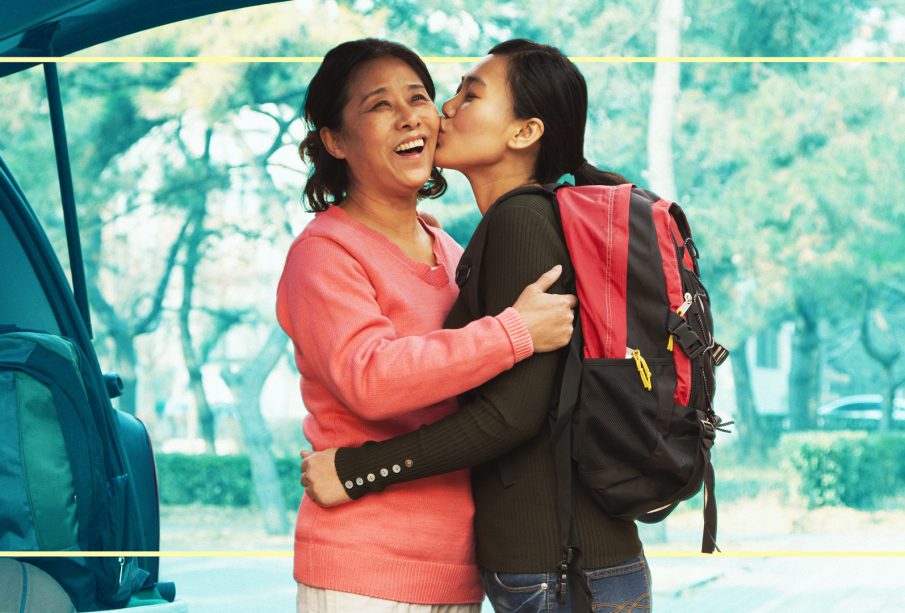 “College is going to be the best four years of your life!”

Or so we well-meaning adults so often tell teenagers. A lot of that has to do with the benefit of hindsight (can anyone really, truly appreciate what it means to be able to take all your classes after lunch until they have to be in an office all day?). But how helpful is it really? Common pieces of advice, such as “Stick to a schedule!” “Get out there and meet people!” and “It’ll all be fine!” might sound good, and have good intentions behind them, but they’re also pretty outdated, vague, and/or just simply not true.

But of course parents want to send their teen off to college with some pearls of wisdom, so what kind of advice should they actually be giving?

Kelly Radi, author of Out To Sea: A Parent’s Survival Guide To The Freshman Voyage, says that first, parents need to change how they’re giving their kids advice. While very direct advice (“You need to do x”) may have served you and your kid well the first eighteen or so years, college is a time where they will transition into becoming an adult. Radi recommends parents seeing themselves now in a mentoring role, rather than in an advising one. It also means leaving the actual decision-making up to your child. College, after all, is just like any other part of your life; it’s going to be different for each person. What works for one student isn’t going to work for another. The best advice will provide guidance but leave the ultimate choice up to the student.

Here are some common pieces of advice we give incoming freshman, and what parents and loved ones can say instead.

Instead of: “Get out there and meet people!”
Try: “What are your magnets?”

Jamie-Lee Josselyn is an advisor as well as the associate director of recruiting for the University of Pennsylvania recruiting program. She also was a college house fellow for several years in one of Penn’s largest freshman dorms, so she has given her fair share of nervous-freshman advice. One thing she likes to emphasize when giving college newbs pointers about meeting people is to think about where their “magnets” are — by which she means the activities, clubs or events that will draw them together with like-minded people.

That can be a club sport, a center on campus, or a volunteer program — but whatever it is, it will give new students a chance to meet people that they will have a chance of seeing again, and who likely have an interest in things they are interested in. And hey, the great thing about Freshman year is there are ample opportunities to try out different “magnets,” and not everything has to be a long-term fit.

Instead Of: “Make sure you stick to a schedule!”
Try: Discussing the importance of sleep

“College doesn’t taste, smell, or look like high school,” says Radi. That means the kind of schedule that your child lived by previously might not work so well in college. But imposing an arbitrary routine on a college campus might be ultimately a losing battle. Yes, some students will enjoy sticking to a 10 p.m. bedtime, but others might find they love doing homework — or, yes, socializing — until the wee hours of the morning.

So, rather than doling out advice about early bedtimes that will likely fall on deaf ears, Radi recommends discussing how important sleep is, especially in college. Maybe your child will opt for mid-day naps to feel energized, or opt out of morning classes altogether if they know they’re a night owl. By focusing on how important sleep is, they can make decisions that prioritize it (even if they aren’t the exact decisions you’d want them to make).

Instead of: “Make sure you go to office hours!”
Try: “By the end of your first year, you should have two adults on campus who could advocate for you.”

Josselyn also passed on this advice, which is a bit more helpful (and widely applicable) than simply telling your student to go to every professor’s office hours. It’s actually a piece of advice she got from her own college advisor, and it makes sense because of this: Not every class is going to be something a student is super engaged with, and not every student is going to make academics their focus on campus. Instead, by simply letting your teen know they should have two adults who are familiar with them and can advocate for their work — whether that’s their academics, athletic performance, volunteerism, you name it — you are giving them motivation to try to make deeper connections with mentors.

Those two adults could be from work study jobs, campus centers or groups, or they could both be professors. The idea here is making the connections achievable (not everything a student does is going to be something they throw themselves into all-in), and with real benefits for the student as well. A “campus adult” can be an invaluable resource —  not to mention someone who can provide letters of recommendation down the line.

Instead of: “You’ll be fine” or “Maybe you’re not ready!”
Try: Validating their concerns

Right before leaving for college, a student, even if they have been super excited up until that point, might get really really not excited to leave home. It’s tempting to simply tell your student, especially if you went to college yourself, that it will all be fine. On the flip side, if a student is really anxious, Radi has even seen a parent worried that maybe her daughter wasn’t ready and needed a gap year or semester off — which is not necessarily the case.

“It’s emotional for parents and students,” Radi sympathizes. But she urges parents to validate their child’s concerns rather than rushing in with grand statements or actions. “Explain that everyone handles this stress differently. Take a deep breath, and take a long-term look at their career aspirations, even if it’s scary right now,” says Radi. You can also assure your teen that you’ll be there for them, even if you may be far away.

If you feel you need to take more concrete action, Radi recommends thinking about ways you can help out with pre-college to-do lists and dorm supplies so you can make sure your teen’s space feels comforting and familiar.